This series looks at the variety of fauna that may be found in the suburban backyard or local reserve and the diversity may be surprising to some people. The obvious fauna are the vast array of birds that are readily seen by day and some by night, but there are numerous species that are nocturnal. Some of these nocturnal species people are familiar with as they tramp across the roof at night with what sounds like hobnail boots on, or they hear fighting in the backyard over food and territory. Others are cryptic and may only be seen infrequently when they enter the house for warmth and shelter. Each week I will highlight a different species that may be found in and around Melbourne’s backyards, parks and reserves, some may be familiar others less so.

Was out working adjacent to a roadside when I came across this little fellow. Almost stood on him due to his beautiful camouflage. Of course it was a warm day and it had decided to come out of the cold of the morning and warm itself amongst the hard surface of the adjacent track.

The Blue-tongue Lizard is often many young child’s entry into the world of reptiles. I remember as a child finding them in and around the bush areas that I lived near in the outer suburbs of Melbourne. Their gaping mouths and blue tongue display, hence the name, scaring many children when they first see them. Once you get to know them you know that the display is a bluff and a quick hand can easily grab them for a closer look, before returning them to the protection of the surrounding bush.

The Common Blue-tongue Lizard is a member of the skink family and is related to what many refer to as the “drop tail skink”, those small skinks that loose their tail when you try to grab them. They are also the largest of the skink family. Easily recognized by the bright blue tongue that is displayed when disturbed or threatened these lizards should be welcome in any garden. Although their open mouth and tongue display may appear scary and they can be quite quick to turn around at the hand that tries to grab them they are harmless and non poisonous. They might scare the person should they latch on but it rarely hurts more likely shocks the victim.

As with most reptiles they become more active in the warmer weather and can often bee seen basking in the sun close to a spot were they can scamper should the need arise. As they tend to be relatively slow moving the food they eat also tends to be slow and so snails, beetles and a range of other insects are their primary diet. They will also eat some vegetation.

The Common Blue-tongue can be found in a variety of habitats from forest and woodlands to open country. They prefer areas were there is lots of ground cover such as tussock grasses or leaf litter and they shelter at night among leaf litter or under large objects on the ground such as rocks and logs. They can sometimes be found in the suburban garden, were pets may alert you to their presence.

This lizard gives birth to up to 10 live young, which are independent at birth. Their range is from Northern Territory down the east coast of Australia and into South Australia.

Blue tongues make an ideal pet and I can remember having a small collection as a teenager. They are ideal pets for persons with an interest in reptiles but they should always be purchased from a reputable accredited breeder or pet store and a license is required to keep them (see link below on licenses). 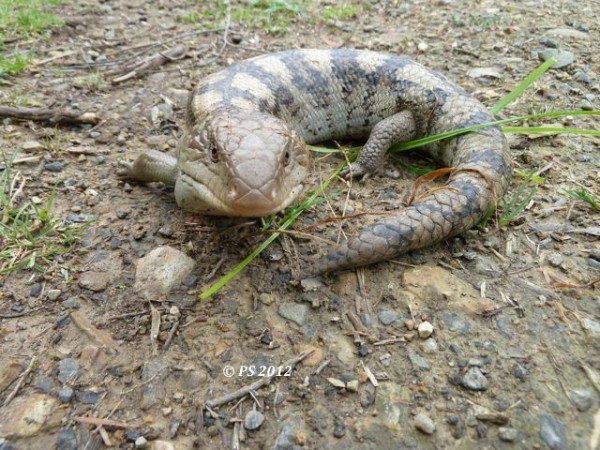